The Cornish and the Welsh are well known sharing the tradition of fine singing, so it was in the best musical spirit that the Torpoint Lady Singers and the Builth Wells Ladies Choir joined together for a concert in St James Church, Torpoint, a week after Easter in 2017. The scene had been set back in 2015 when the Torpoint Ladies had visited Wales and performed with the Builth Wells Choir. It had been such a great success, both in terms of the singing and the friendships established that it was only a matter of time before the return visit was arranged. Arriving at their base in Plymouth’s Continental Hotel, the party contained 33 singers as well as their musical director, Ionwen Davies, accompanist Helen Sedgewick, and several travelling supporters. 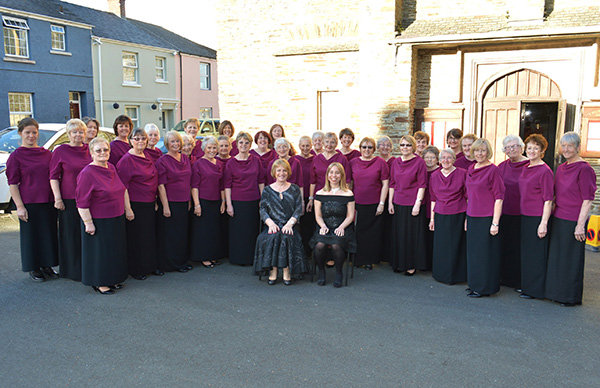 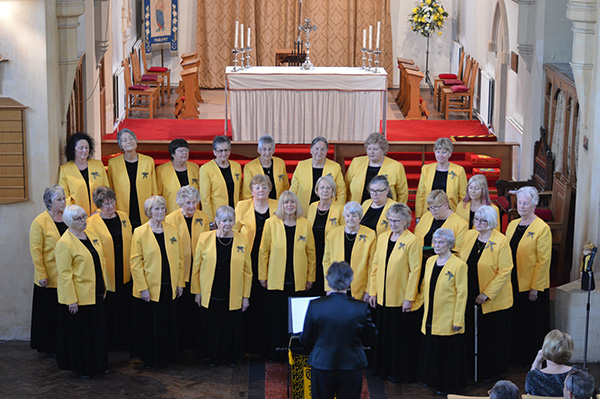 After a welcome from MC and Torpoint Ladies Chairperson, Chris Trethewey, the Torpoint Ladies opened the concert with two popular songs by Burt Bacharach and Hal David. “What the World Needs Now” is a song that could hardly be more appropriate to start with – the answer, of course, being Love, and there was certainly plenty on show during the evening. The number "Close To You" always sends a tingle down the spine of the Torpoint Ladies' supporters thanks to its luscious harmonies, but the spine tingles for different reasons during the complex, dark arrangement of the Skye Boat Song, a piece about love and tragedy in Scotland. Then the spirits rose once more for the sparkling “O Rejoice That the Lord Has Risen,” a piece especially appropriate so soon after Easter. 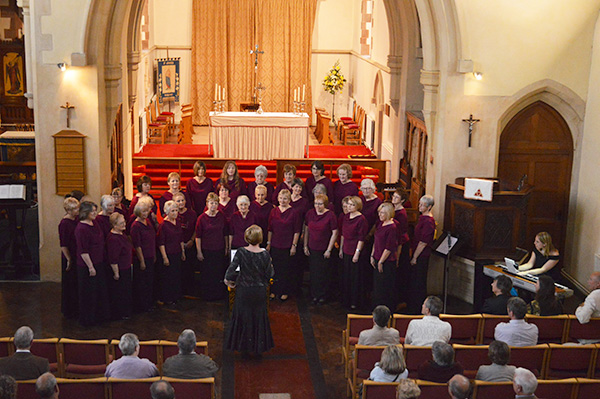 The Builth Ladies’ set opened to “With a Voice of Singing,” equally appropriate in the circumstances. Unsurprisingly, the Welsh ladies performed two items in the Welsh language. In the first half the hymn "Calon Lan" was spiritually delivered, whilst in the second half their piece, "O Nefol Addswyn Oen" was touching for their beautiful harmonies and lyrical Welsh tones that showed the English audience that it is not necessary to understand a language to appreciate the beauty of it. “Sing a Song of Sixpence” is a brilliantly conceived grown-up version of the well-known nursery rhyme, and the ladies delivered it to an appreciative audience with comic aplomb. Finally, those who had made the trip to Wales in 2015 were reminded of the special welcome they had shown us as they sang “We’ll Keep a Welcome in the Hillside”. 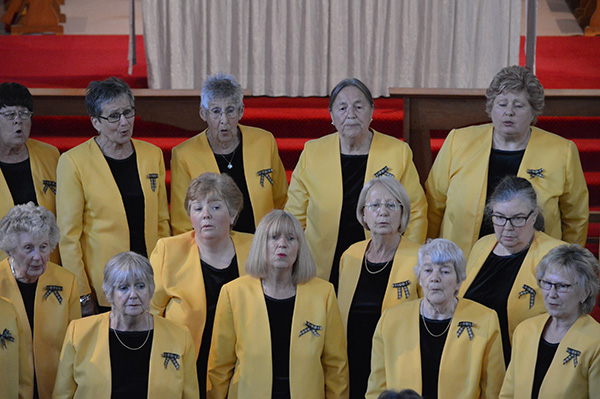 To start the second half of the show, the Torpoint Ladies drew upon one of their favourites out of their repertoire, the lively “Everything’s Coming Up Roses and then the gentler Barbra Streisand love song, “Evergreen.” Next, they performed a special arrangement of Abba's "I Have A Dream" for the first time. This challenging piece of music takes much practice and the ladies were spot on with their exciting performance. Finally, their set ended with an echo of the Big Band Era of the 1940s, “Boogie Woogie Bugle Boy,” a piece surely designed to make accompanist Sue Westwell’s left hand ache! 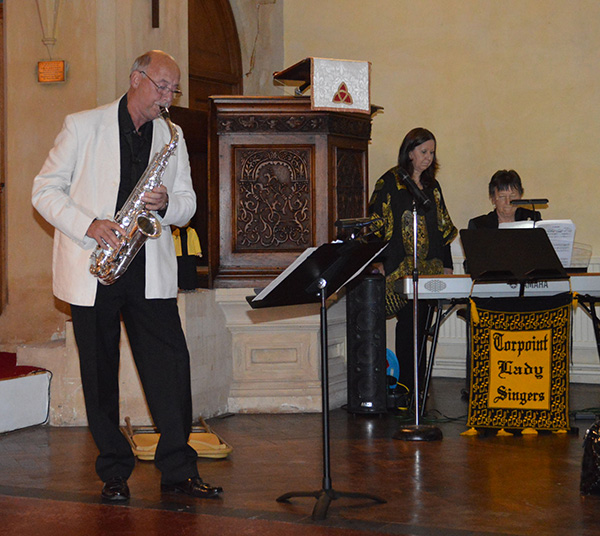 The concert was perfectly balanced with a set by each choir, separated with an interlude from special guest soloist, Roger Waterfield. Normally, Roger plays lead viola for the Plymouth Symphony Orchestra, but one his favourite instruments is alto saxophone on which in the first half he performed the beautiful, atmospheric "Aria" by Eugene Bozza. In the second half of the concert Roger played the well-known exhibition piece "Czardas" by Vittorio Monti in which the listener is transported to a smoky, dark Rumanian café to be entranced by whirling gypsy dancers. Roger’s performance was exemplary in musical terms, and a lot of fun besides. 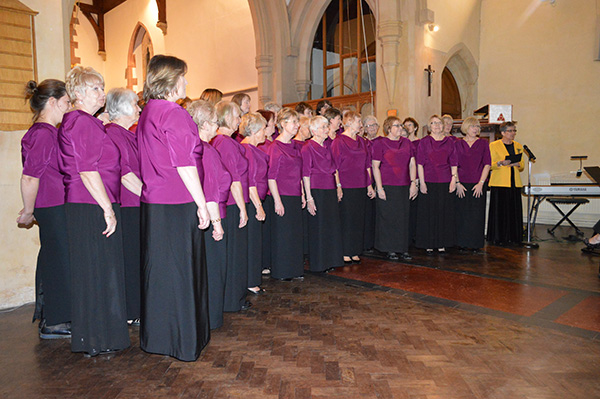 Torpoint's Deputy MD, Lin Curtis (far right) made everyone laugh with a poetic description of day-to-day life in a choir, in which the altos got the wooden spoon for their limitation to just three notes and 22-bar rests!

The Welsh ladies’ second set began with Chicago's "And All That Jazz" that brought out the lighter, saucier side of their singing, whilst, in total contrast, their version of the Hallelujah Chorus, much practised because of their performance at a massed choirs event in the Albert Hall last year, was both faultless and rousing. Their set was completed with the gorgeous “Amen” by Alan Simmons. 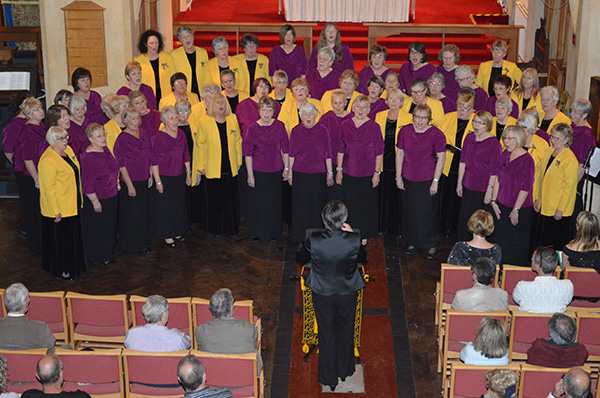 The evening would not have been complete without a couple of numbers performed jointly and so the two choirs joined together to perform the popular songs. The TLS MD, Sylvia Fraser led the choirs in "Unchained Melody"and then changed places with Ionwen Davies for "As Long as I have Music," after which the concert ended with the Welsh National Anthem and thunderous applause as the audience expressed their thanks for such a wonderful evening. The only downside to the evening came when the visitors discovered they had to pay to leave Cornwall, but then they remembered that their own country does the same! 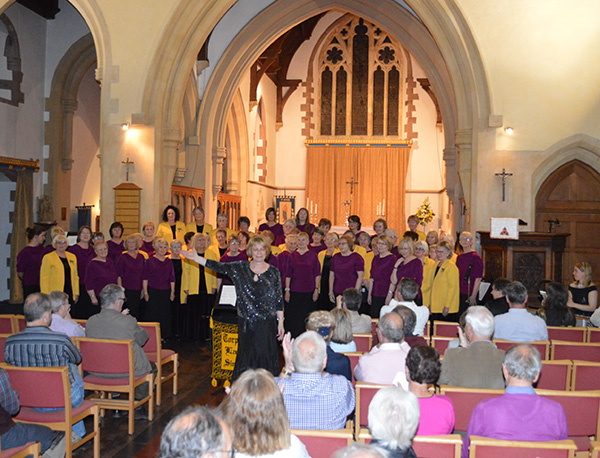