Below: In February, the ladies presented a cheque for £540 to Henry and his mum, from local charity 'Hugs From Henry' The money was raised from their joint Christmas Concert with Rame Peninsula Male Voice Choir last December.

For 2019, Torpoint Lady Singers chose the Cornwall Air Ambulance as their dedicated charity. After 12 months of fundraising, with concerts, coffee mornings and a summer six-hour sing-along, the ladies presented a cheque for £1,720 to Air Ambulance volunteer Martin Hagues (below). Martin attended the ladies practice evening and gave them a short talk on the service and the new air ambulances coming to Cornwall in 2020. 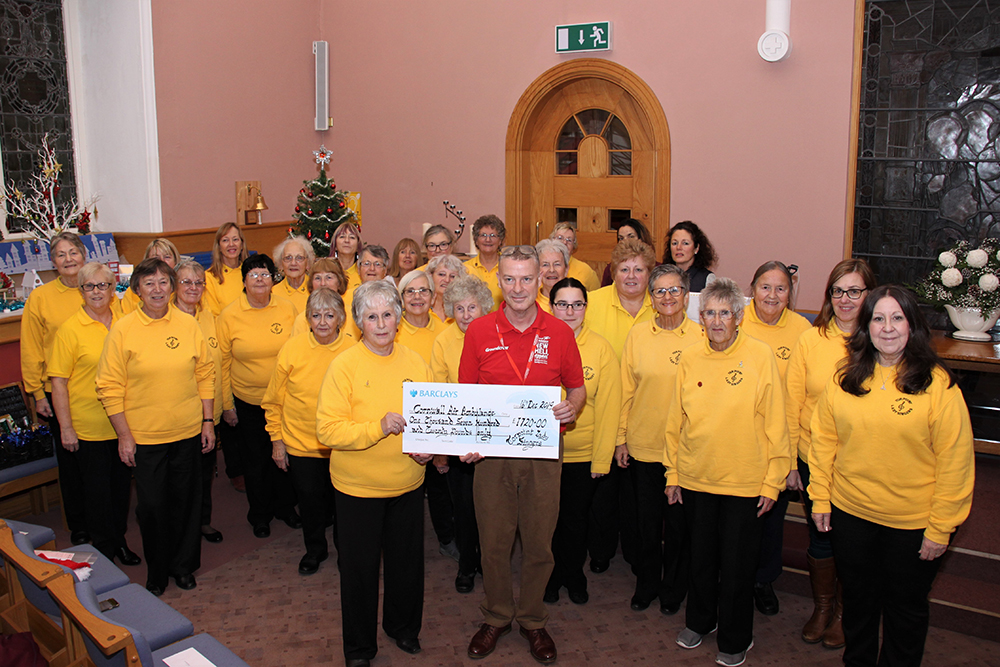 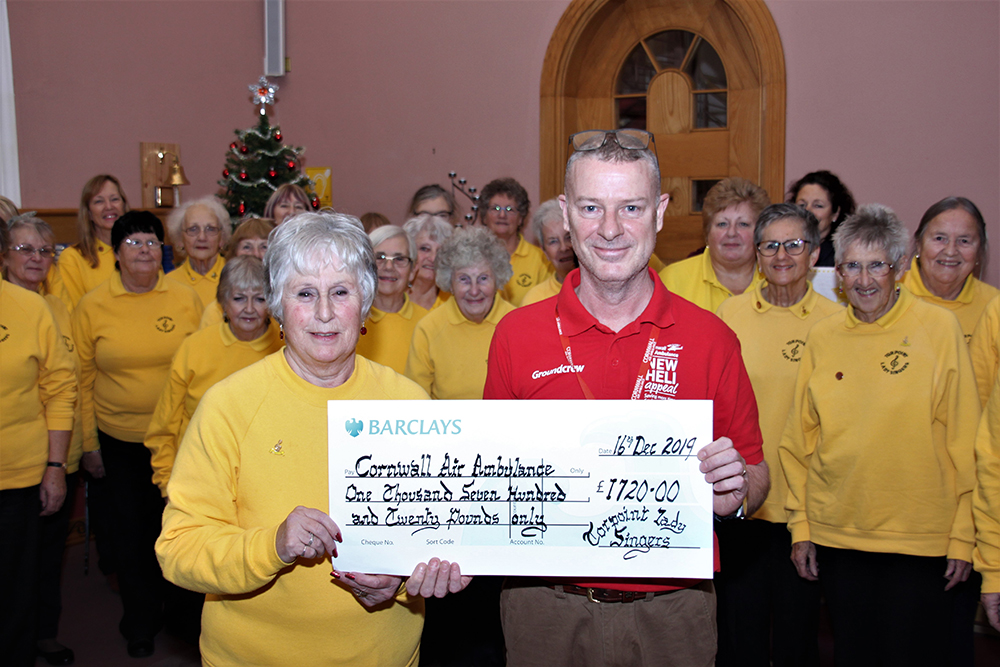 In February, the ladies paid a visit to the Cornish site of Childrens Hospice South West to see the wonderful work carried out by the charity. They used the visit as an opportunity to present a cheque for £625 following their fundraising efforts at the end of 2018.

After 25 years of their major fundraising event, the Annual 12-hour Singathon, the Ladies decided to take a break in 2018.

However, their fundraising activities continued. In a joint concert with the Saltash Ladies Choir on 30 June, they raised £325 for the 2018 chosen charity - Cancer Research UK, adding to the £600 already raised from the concert with Mousehole MVC.

In December of 2018, the TLS ladies presented a further £1345 to Cancer Research. 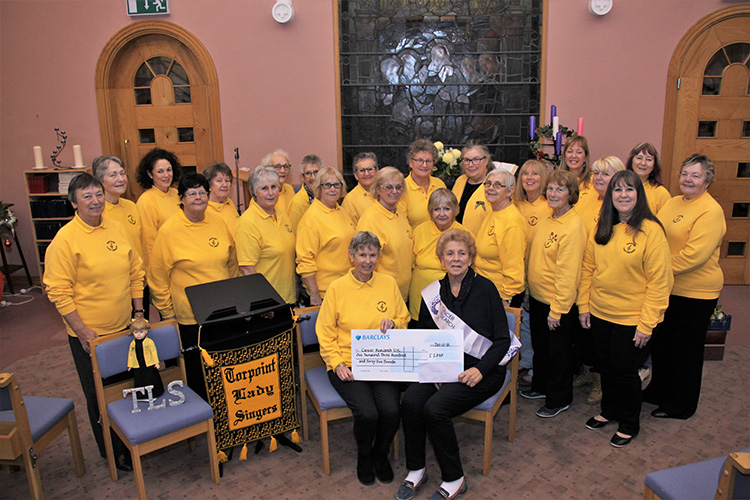 Their fundraising also continued at the Lion's Fayre on the Torpoint Scool Sports Field.

The 25th Annual Singathon took place in the Cornerstone Church, Torpoint on Saturday 17 June 2017. Commencing at 0900, the Town Mayor, Councillor Lambert Keise and his wife started the ladies on a 12-hour marathon sing in aid of the YMCA. By the end of the day over £1,000 had been raised with more still to be collected from sponsors.

2017 is the year of the 30th anniversary of the formation of the Torpoint Lady Singers.

At their concert with the Builth Wells Ladies Choir, £500 was raised for the charity researching Sepsis, and shared with St. James Church.

In 2016, the Lady singers held their 24th Annual Singathon in aid of the Plymouth and District Leukaemia Fund. The picture below shows them commensing the twelve-hour day of song, encouraged by the Mayor of Torpoint, Councillor John Crago and his wife. 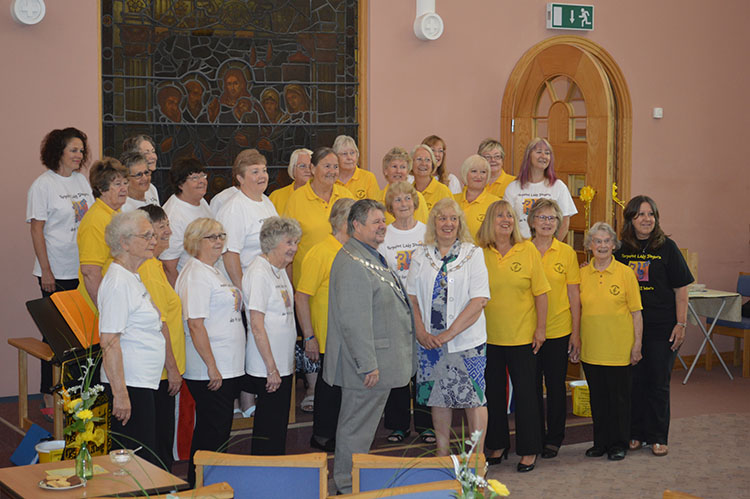 The Annual Christmas Concert was in aid of the Derriford Hospital Gold Dust Appeal and £300 was raised on the night.

In December 2015, the Joint Christmas Concert with the Rame Peninsula Male Voice Choir raised well above £1000 for the Plymouth Hospitals Leukaemia Fund. 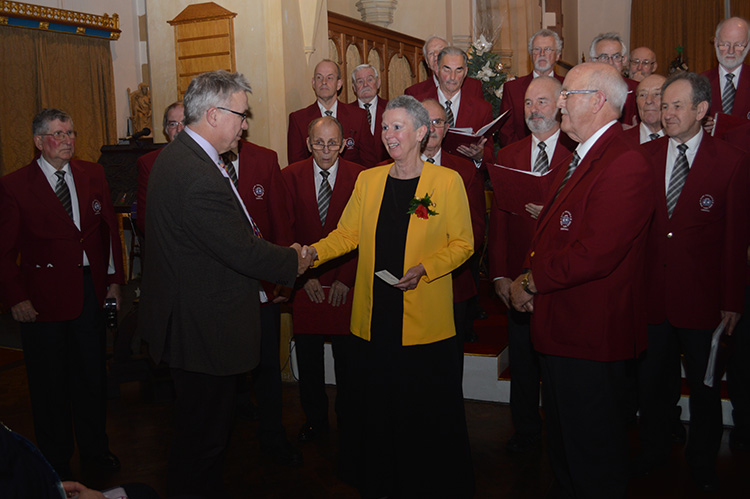 Above: TLS Chairperson, Chris Trethewey, and RPMVC Treasurer Barry Rundle present a cheque to Dr Tim Nokes, Consultant Haematologist at Derriford Hospital, who received the funds on behalf of the charity.

In 2014 The Lady Singers adopted the local charity Jeremiah's Journey as the focus of their fundraising efforts. Proceeds from several events, the biggest of which was the annual Singathon, were given to this organisation. The photo shows a cheque for £2620 being handed over at the concert with the Casterbridge Male Voice Choir, but the total raised over the year surpassed £3,400. 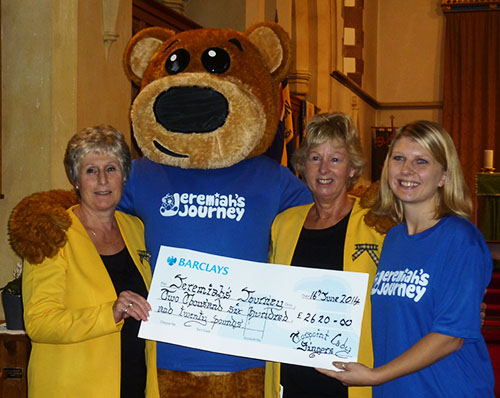